Leave a comment...
Posted in Apprenticeships, News | No Comments »

Another successful training day held at Milton Hill House Hotel, Steventon. All staff gathered for a day filled with training, we had Chopsaw training, Manual Handling, 18th Edition regulation changes, Time management training, face fitting, Customer journey mapping – to list just some of the many training programmes carried out. The event was finished off with a 3 course meal, drinks and some dancing.

We carried out a charity raffle with some top prizes being won and raised our first amount of money for our chosen charity of the year Style acre raising £915.00. Followed by our awards ceremony, we had winners from Apprentice of the year, Electrical engineer of the year, Mechanical Engineer of the year and finally Project of the year. All winners received a framed certificate, an award and a gift voucher. The winners were all picked by the staff at Group GA voting for whom they thought deserved to win the awards.

Our Fire & Security team received there first google review which was exceptional – Well done to all the team.

Chosen Charity of the year 2019

Its great to announce that our Charity of the year for 2019 is Style Acre.

Style Acre is a charity which provides person-centred high quality support for over 250 people with learning disabilities and autism. Each and every individual they support is valued and helped to lead a meaningful life whilst realising their potential. They work with families and carers to provide the best possible experience for people they support.

Unlike many other charities, all of Style acres overheads are paid for by there contracted income which means any money we raise for them will go direct to the beneficiaries.

We already have a couple of fund raising events booked in with a charity raffle on our Social & Training day in March.

Leave a comment...
Posted in Charity, News | No Comments »

We recently installed a new security alarm at Refresh Hair design in Didcot and the residential flat above the shop following on from a break in that happened while the building was empty.

Thankfully the burglar was disturb and did not manage to get away with any items.

Having a professionally installed intruder alarm is a wonderful deterrent and has also provided peace of mind.

We currently have a fantastic offer on intruder alarms, offering residents Intruder alarms fully installed from £795.00 + VAT. If this is something you maybe interested in please call our office on 01491 835875 using option 3.

It is fantastic news that we can announce we have just employed 2 new electrical apprentices for this years intake. They have both spent some time doing work experience with us which we received some fantastic feedback on them. We are all looking forward to watching them progress through their apprenticeship.

Leave a comment...
Posted in Apprenticeships, News | No Comments »

GA Electrical & Mechanical staff, from directors to apprentices, spent the day at Milton Hill House Hotel in Abingdon to take part in a number of comprehensive training and team building sessions rounded off by a well-deserved social evening.

Surrounded by 22 acres of tranquil parkland just 13 miles from Oxford, Milton Hill effortlessly blends a graceful Georgian manor house with modern facilities; its landscaped Italian gardens and beautiful vistas made it the ideal venue for a day of work, rest and play. 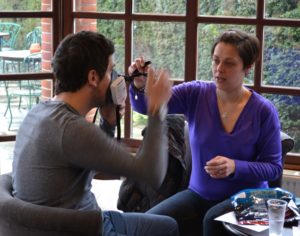 This was the first time that training usually undertaken over the course of a year by GA staff was scheduled to be completed in a day. Comprehensive instruction in First Aid, Asbestos Awareness, the proper fitting and usage of Face Masks on site, handling a ‘Spit’ Gun plus familiarisation sessions about new software and internal processes made it a very productive day. A tasty and substantial buffet lunch that got a big ‘thumbs up’ from one and all was enjoyed between the morning and afternoon sessions. Then it was back to their rooms to chill out, don their glam rags and prepare for the night ahead. 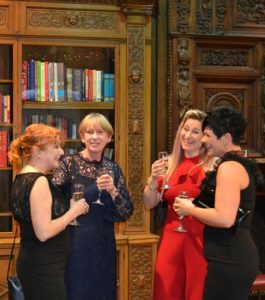 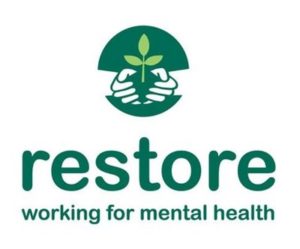 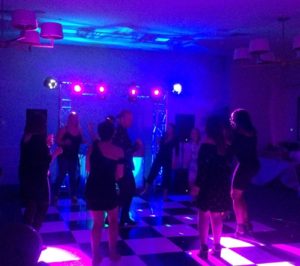 Managing Director Carl Vink joined the ‘boys’ in the hotel bar for pre-dinner drinks whilst his wife Naomi hosted a ‘Ladies Bubbles’ reception in The Library for partners. A wonderful 3 course dinner and a raffle of some great prizes in aid of ‘Restore’ followed with the evening rounded off by some impressive shapes thrown and amazing moves made on the dance floor by one happy band of work mates. 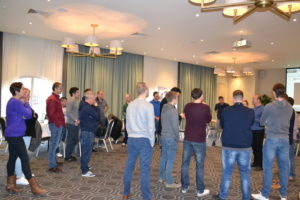 At the end of the training sessions, MD Carl Vink talked through the future of the company and the introduction of new software and processes to improve communication and project management. As a business, GA has moved away from Microsoft over to Google and Carl outlined the advantages of doing so.  Everyone now has the use of an internal app for communication dedicated to ‘joined up’ project management; weekly team meetings can be held via everyones smart phone utilising video conferencing. 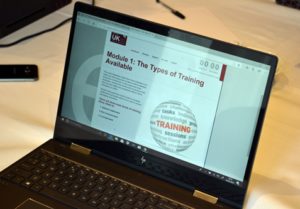 He explained another platform that has been devised for sharing all project information like drawings and photographs live between the office and site including progress pictures on all jobs that are uploaded to one place so that they can be accessed by all. There are also dedicated internal web sites for each project so that anyone can look up RFI schedules, contact lists, key dates and what tasks have been assigned to which person. GA as a company is at the forefront of utilizing this kind of technology but also developing their own systems to improve work flow. GA now has a secure internal software that is easy to use to create electrical and gas certificates via mobile phones and iPads which no other company currently has.

Standing the Test of Time 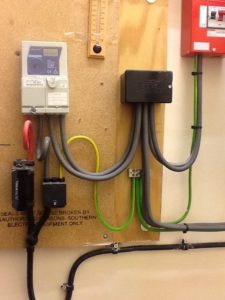 A GA electrician was booked in to test an installation we first put in place fifteen years ago for the client. Apart from a couple of additional circuits someone else had subsequently installed (alas, rather poorly), it was really satisfying to see a quality, neat piece of work which has lasted. 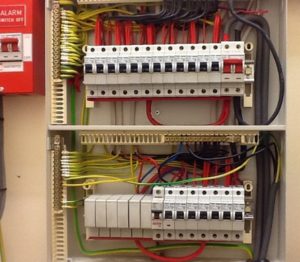 Lighting Changes May Have Benefited Health in a Senior Care Facility

Details of a pilot installation of tunable-white LED systems at a senior-care facility have just been released. The project was undertaken at a care home in California to establish goals that included learning more about how tunable-white lighting affects the sleep patterns, night-time safety, and other behaviours of the residents; and better equipping the staff to provide excellent care by improving the quality of lighting (e.g., reduced glare, better controllability) relative to the incumbent system.

Pre- and post-installation field measurements of illuminance and colour quality were recorded and the energy consumption of the new system was compared with that of the old one. The lighting solutions followed published guidelines which are based on the role light is believed to play in suppressing the release of melatonin, a hormone that helps control the sleep-wake cycle. Disturbed sleep patterns are common among the residents of senior-care facilities.

Several different tunable-white LED systems were chosen and installed in one corridor, two resident rooms, the nurse station, the common family room, and the administrator’s office. The incumbent fluorescent systems were evaluated in August 2015 and the trial LED systems in December 2015.

The illuminance levels in the resident rooms and bathrooms did not meet current industry standards with the incumbent fluorescent system, but exceeded recommendations for the over-65 age group with the LED system. Colour consistency for the tunable LED luminaires used in the corridors, nurse station, family room, and administrator’s office was very good between luminaires and over the dimming range. Energy savings for the tunable LED luminaires in the corridors was 45% relative to the fluorescent system, based on the reduced power, but those savings increased to 68% when the automatic dimming was considered.

Care staff documented a number of important health-related benefits that may have been attributable, at least in part, to the lighting changes. For example, among the three residents studied, agitated behaviours such as yelling and crying decreased following the LED trial installation. In addition, psychotropic and sleep medications were significantly reduced for one of the residents. And in the corridor studied, the number of patient falls recorded decreased after the LED installation.

Among the lessons learned from the project were that contractors aren’t yet familiar with tunable systems and controls, that finding the proper balance of automatic versus manual tuning of the lighting spectrum and intensity is challenging, and that educating residents and staff is essential when implementing new lighting solutions in care homes. 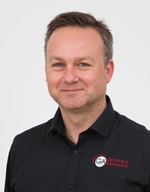 Joining Team GA as our new Mechanical Contracts Manager is Jason Playle. He’s been involved in the buildings services industry for the best part of 25 years and has project managed numerous commercial projects in residential, retail, office fit-out, hotel fit-out, hospital and pharmaceutical sectors. Jason project managed the RES Global Head Offices in Kings Langley (bore hole cooling, solar thermal, Biomass and gas heating applications). He’s a specialist in the Renewable sector, working for the last 4-5 years on renewable heating applications. Jason is father to his 2 children and 2 step children, loves to travel and enjoys eating out. His other passion in life is Arsenal FC, the team he’s followed from a child. 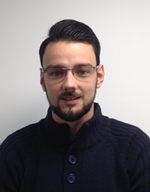 Scott says: “I thrive on working in high pressured and challenging working environments. I’m highly motivated to ensure that projects are delivered to their required targets producing excellence in outcome.” 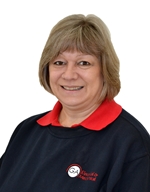 We welcomed Sarah Spencer to the company earlier this month as our new accounts assistant whilst Emily Wright is on her maternity leave. She’s been working within the financial environment for many years and only recently choosing to work part-time to get a nice work/life balance. She enjoys baking, knitting, spinning, walking her dogs and spending time in Sussex.

Sarah says: “I like to think I’m a very approachable person who enjoys a laugh whilst maintaining my professionalism”. 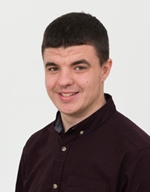 Ryan Cheetham has been with the company for 5 months when he started out on site as a plumbers mate working on some of our key projects; Bank Farm, Walton Place, Bowden House and Weighouse Street. Now Ryan has brought his experience into the office to offer Project & Procurement support. Before joining Team GA, Ryan worked as a customer service supervisor at ScrewFix for nearly 3 1/2 years working at the Abingdon and Cowley trade counter. In his down time, he enjoys going out socializing with friends and is a keen motorbike rider.

Our congratulations go to our GA employees and their partners who recently became proud parents. 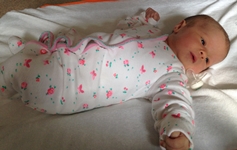 Emily and Nathan Wright celebrated the arrival of their daughter Felicity Eva (left). 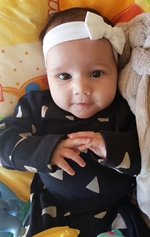 Lee and Maxine MacDonald welcomed their daughter Myla into the world (right). 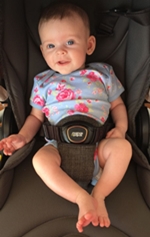 Liam and Lucy Faulkner were blessed with the addition of their daughter Lara to the family (left).