The Ins and Outs of Emergency Lighting 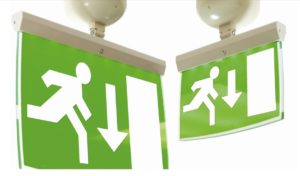 ‘Standards as per the Industry Committee for Emergency Lighting’ by Edmund Wood, Qualifying Supervisor.

Overall target of working to this standard

Emergency lighting shall be sited at all points of emphasis as listed below:

Escape routes should have a minimum lighting level of 1 Lux with the emergency lighting in operation.

The escape route emergency lighting system in each room, area or route shall be from at least 2 luminaires, to ensure that failure of one luminaire does not plunge an area of the escape route into complete darkness, or make the directional finding effect useless.

NON-MAINTAINED EMERGENCY LUMINAIRE – A luminaire containing one or more lamps, which operate from the emergency supply only upon failure of the normal mains

SELF-CONTAINED EMERGENCY LUMINAIRE – A luminaire or sign providing emergency lighting in which all the elements such as battery, lamp and control unit are contained within the housing

COMBINED EMERGENCY LUMINAIRE – A luminaire that contains 2 or more lamps, at least one of which is energised from the emergency supply and the remainder from the normal supply. The emergency lamp will either be maintained or non-maintained

Use of exit signs

Exit signs above a doorway used to indicate a safe escape route should be installed so as to indicate the direction of travel after you have used the doorway.

If the doorway escape route leads to a change in level upwards or remains on the same level then an up arrow is to be used.

If the doorway escape route leads to a change in level downwards then a down arrow is to be used.

Appropriate test records must be kept and be available for inspection if required by the fire authorities. It should contain a full record of both annual full duration and monthly functional tests.

It might be possible for some companies/maintenance contracts to request different testing intervals. BS 5266 Part 1 lists the intervals above and so here at GA we will carry out any testing as per this Approved Code of Practice.

If you’d like us to test your emergency lighting, call us on 01491 835875 or drop us an email at reception@gaelectricalandmechanical.co.uk