Using LED Lighting in Your Home 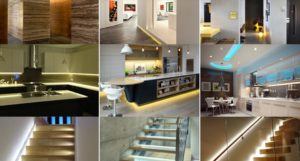 LED lighting is rapidly becoming the most popular kind of lighting found in homes and businesses in the UK today. The reason is very simple – these bulbs use 90% less energy compared to halogen or incandescent bulbs and they can last as long as 15-20 years, meaning huge energy savings and no more swapping bulbs out when they blow!

The reason why LEDs are so much more energy efficient is that they produce light in a very different way to the older style bulbs. Older bulbs normally have tungsten filaments that get extremely hot when electricity is passed through them – this makes them glow, producing light. About 90% of the electricity used in a traditional bulb is converted into heat, while just 10% is actually given off as light.

LED bulbs produce light as a result of the movement of electrons in a semi-conductor material. This may sound quite techy, but essentially when they produce light they don’t get anywhere near as hot and so this 90:10 ratio swaps around – LED bulbs convert electricity into approximately 90% light and just 10% wasted heat. This obviously means huge energy savings – as a rule of thumb when choosing a LED bulb, divide the wattage of the old bulb by 10 to get a similar level of performance. For example a 50w halogen spotlight in the kitchen should be replaced with a 5w LED spotlight – hence the 90% energy savings.

Why do LED bulbs last longer? – The reason that LED bulbs last longer is basically that there is no filament. The filament in more traditional bulbs goes from being cold to extremely hot in a split second. Every time it is turned on and electricity travels through it, a small amount of tungsten burns off the filament so over time it gets thinner and weaker. Eventually when the filament gets too thin, it simply snaps and the light bulb blows. LEDs are known as solid-state lighting – there is no filament that gets hot. They simply emit light when the electrons move through the semi-conductor material, hence they last far longer.

LED bulbs last longer and use 90% less energy – what’s the catch? – The main thing is the price; LED bulbs are considerably more expensive than traditional incandescent (old bulbs with filaments), halogen spotlights and even the old CFL energy saving bulbs. The energy savings that result from making the change will cover this cost in just a year or so, but it is a bigger upfront investment. The other thing is that there is huge variation in the quality of LED bulbs. In fact, making sure you source the correct bulbs is really important – it is not simply a case of going down to B&Q and picking up the first you see.

Another thing that needs to be considered is the type of light the bulb produces – the colour, the quality and so forth. If you are looking to match your warm white halogen bulbs, you need to go for a colour temperature of approximately 2800k. )

12v versus 24v bulbs – One thing that you do need to be mindful of is when 12v bulbs have been used. This is one of the great mysteries of modern times – the 12v bulb. If you have spotlights in your home, there is a 50:50 chance that the electrician that installed them would have put in 12v spotlights. Basically they require separate transformers in the circuits to take the mains 240v down to the 12v that the bulb requires. Aside from the transformers, the issue comes when you try to put LED bulbs into these fittings. They go in all right, but then when you switch on the light they tend to flicker. This is because the transformers require a minimum load to operate properly. That means that if each bulb has its own transformer, the chances are you will need to replace the transformer with an LED driver if you install a 12v bulb e.g. an MR16 Spotlight. If there is one central transformer in the circuit you might get away with it, because the cumulative load might be enough to get the transformer/driver to work – but it is not guaranteed.

To be honest, if you want to make the switch to LED lighting then we would always recommend changing the fittings so they can accommodate 240v bulbs. You can buy a 240v fitting + LED bulb for approximately £10 so this would always be what we would suggest instead of trying to find an LED driver that works with your existing fittings and your new 12v LED lights.

Our thoughts on LED lighting – Here at GA Electrical and Mechanical we recommend people make the move to LED lighting. They use 90% less energy than traditional lighting and they last up to 20 times longer, so it really does seem a bit of a no-brainer to us.

Before looking to buy LED lighting for your home or workplace, it is really important to understand how light works and what makes some light different to others. The importance of light in the home cannot be understated; about 80% of our sensory input is through our eyes, therefore if the lighting in your home is wrong it will obviously have a huge negative impact. In addition, recent studies suggest that lighting has an impact on health and wellbeing. Good lighting makes people feel both mentally and physically better so it is worth getting right!

What determines the type of light produced by a lamp? – The light produced from a lamp is dependent on three things: colour temperature, colour rendering and lumen output.

The best way to envisage this is to imagine heating a piece of iron – initially it will be a dark dull colour, however as you heat it up, it will begin to glow orange and as you take the temperature up even further it becomes a brighter white. The CCT refers to the colour at a particular temperature, so the hotter the temperature the brighter (and whiter) the light colour. Now the CCT is actually determined from the colour changes of a ‘black body radiator’ as it is heated – but obviously the piece of iron is a much easier concept to get your head around!

Typically we refer to low colour temperature as being warm in appearance, while high colour temperature is referred to as cool in appearance. If you consider your home, it is likely to be dominated by warm light – halogen GU10 spotlights and traditional incandescent bulbs, conversely offices tend to be lit by more cold light, including things like fluorescent tubes.

Colour rendering – Colour rendering is the ability of a light source to give good colour representation of the colour it is illuminating. It is measured on a scale of Ra 0–100 (Ra is sometimes replaced with CRI). Ra 100 is considered the best and this is equivalent to the rendering provided by daylight, hence many work places are now using daylighting as a matter of course. The European Union’s standard for workplace lighting (EN 12464-1:2011) dictates that lighting needs to be a minimum Ra 80. There is obviously no such standard for the home, but the higher the Ra number, the more vivid and lively representation of the object being illuminated. It is possible to get lights with Ra 90+ but as you might expect the bulbs will cost considerably more.

Lumen output – The lumen is a unit of measurement for the brightness of light. A bulb with a higher number of lumens will produce a brighter light, while fewer lumens results in a dimmer light. In the past, consumers relied on watts to get a feel for the brightness of a bulb. A 100w incandescent bulb is far brighter than a 40w bulb for example. However since the advent of low energy lighting, comparing wattage just isn’t feasible since a 5w LED might produce the same number of lumens as a equivalent 40w incandescent bulb.

In the table left you can see a list of typical bulbs and their relative luminous efficiency – which is simply the lumens you can expect per watt. The traditional incandescent bulbs fare worst and the new LEDs are the best. When replacing your existing bulbs with new LEDs, we recommend using the lumen as a comparison, to ensure your new LED bulbs have a similar level of brightness.

Lux – Measuring the Intensity of Light – Remember that the lumen is a unit of measurement for the brightness of light. Regardless of how bright a light is, if you are a long way from it, it is going to provide less light intensity than if you stood right next to it. Lux is the measure of the apparent intensity of light hitting or passing through a surface at a given distance. A light source 1 metre away will appear far brighter than the same light source from 100 metres way.

What this all means for the lighting in your home – In the majority of cases, we recommend going for a bulb with a colour temperature of between 2,700k and 4,200k. This is the equivalent to a more traditional incandescent or halogen bulb. Having said all that, the colour temperature of the lighting you opt for is a very personal preference, but we do recommend trying a few different bulbs to see which you prefer before investing in a whole load of bulbs.

One thing that you do need to ensure is that you opt for the same colour temperature in each area. This means that when you bulk buy bulbs for a targeted area they are the same colour temperature and ideally the same bulb (this will ensure they have the same lifespan which can reduce maintenance costs). In terms of colour rendering, as mentioned, bulbs that have a higher colour-rendering figure will cost more. In stairwells and corridors, you can get away with cheaper bulbs that don’t offer the same colour rendering capabilities as ones you might want in the living room or kitchen.

We always seek to provide building solutions that are up to the high standards our clients expect yet minimise the impact on the planet. Contact us on 01491 835875 if you would like to discuss LED lighting further.